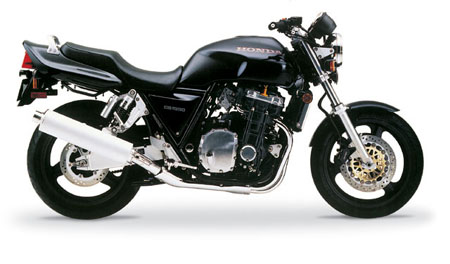 “The CB1000 is one of the few remaining examples of the Japanese fascination with the retro look (remember the Kawasaki Zephyr 400, 750 and 1100?). Touted in the late eighties as the next big trend, these bikes sold well in Japan, but nowhere else in the world. Ahh well. Could it be that retros are just too boring? They need a gimmick? The CB’s gimmick is its size. Originally known as the “Big One” (we think a burger company sued ‘em to stop that name being used), the CB 1000 is remarkably large. The CB looks huge, on the outside. You don’t notice it from the pictures, because the CB has 18 inch wheels, front and rear, which make it seem proportionally smaller in photos. In real life, it’s big. That beautifully finished aluminum alloy swing arm is about the same size as the frame of some sport motorcycles.”